Scientists Invent a Tractor Beam Made of Sound 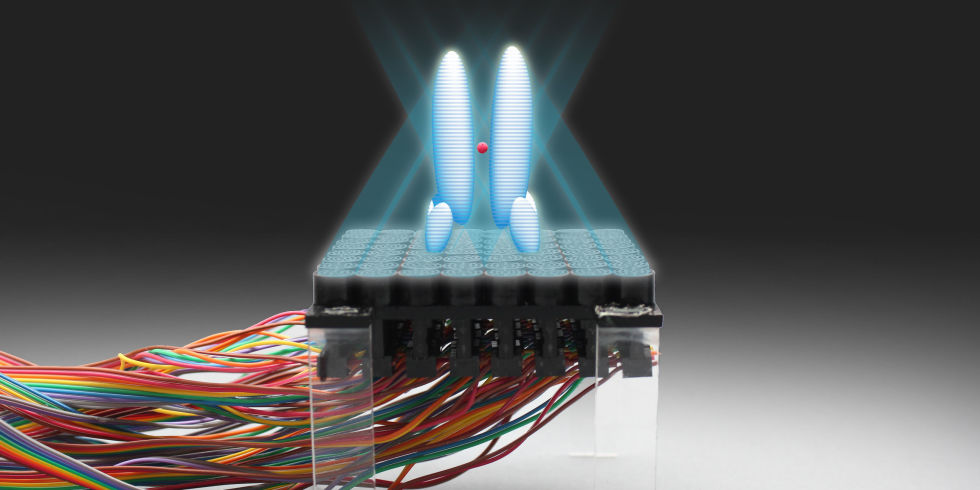 Scientists have long been able to levitate small objects, like drops of water or plastic pellets, using only the power of sound. By sandwiching an object between two sets of speakers—or a speaker and a reflector—you can send precise, energetic blasts of ultrasonic noise to trap objects midair. But today, a fascinating new breakthrough can now accomplish this odd feat of levitation with a single array of speakers on just one side. It’s like using sonic tongs with just one side instead of two.

A team of researchers led by Asier Marzo, a software engineer at the Public University of Navarre in Pamplona, Spain, has just created a working tractor beam with sound. The scientists discovered a way to trap, move, twist, and rotate small objects with only a single set of speakers that are silent to the human ear and even work upside down. As they reporti n the journal Nature Communications, the invention could be used in developing tangible, 3D holograms made of tiny particles, or could find a future in acoustic surgery that requires no incision.

Philip Marston, an acoustic physicist at Washington State University who was not involved in the research, says, “There’s been a long-reaching effort for doing these kinds of things with optical laser beams, and now [this research team] has found a relatively inexpensive way to do the same with acoustic sources.”

How can anyone turn a one-sided collection of speakers into something like a tractor beam? To picture what Marzo’s speakers do, it helps, strangely enough, to picture the technology in terms of holograms. Marzo explains that the software behind the device can calculate and angle the speakers and precisely time their ultrasonic pulses to create complex and beautiful interference patterns of noise. Essentially, they are painting hologram-like 3D shapes of sound into the air.

For example, Marzo’s speakers can paint a 3D sound that basically looks like the shape of a bottle. The sides, bottom, and lid of the cylindrical “bottle” are where the air is highly jittery and resonant with ultrasonic pulsations. Outside and inside of the bottle, the air is more-or-less silent. Here’s where it gets tricky: Because objects will move from highly resonant air to quieter air, an object like a plastic pellet that has this bottle “sound shape” painted over it will be forced inside the bottle and trapped there. By angling the speakers and thus moving the bottle around, the researchers can move the trapped object inside whimsically through the air. To make his system act as a tractor beam, Marzo can project a bottle shape onto a pellet 20 centimeters away and then pull it in close to his speakers, even when fighting directly against gravity.

Beyond the bottle approach, Marzo has been experimenting with two other useful sound-shapes. One shape looks a bit like two bookends (Marzo calls it a “twin trap”) and acts as tweezers. By squeezing and object with the tweezers and then moving or turning the shape of the tweezers around in the air, an object can be rotated and twisted at all angles. Marzo found he also can create what is essentially a hurricane of sound, capturing a round pellet and spinning it at a blazing 2,000 rpm.

“I personally think this would be very useful as a centrifuge. You can imagine spinning a living cell to separate the different components,” he says.

Right now Marzo’s invention is pretty limited in the size of what it can manipulate—mostly objects of plastic around the 1-millimeter size. Boosting the power output of his tiny transducers could allow the manipulation of even metal-dense objects. But, Marzo says, it may be more useful to work in the micro-range.

“This work is not just some whimsical, pointless attempt to realize a sci-fi concept like a tractor beam,” he says, “We have no interest in trying to find ways to use it on large objects like houses or cars. In fact, this technology is easier, far more interesting, and has even more applications on a smaller scale.”

Consider using acoustic tweezers in medicine. “It’s fascinating to think of using sound to manipulate within the human body without any surgery,” he says, imagining one day being able to manipulate small blood clots, kidney stones, and tumors through speakers in the same way we take imaging ultrasounds today. However, Marston at Washington State University says, before that happens, the researchers will likely have to delve deeper into how to create their acoustic shapes in different materials, like water.

The most immediate use of the tech—and what Marzo calls the simplest, even though it sounds like sci-fi—would be using many speakers to create complex, computer-generated sound paintings that levitate many small pellets in predetermined shapes. We’re talking about painting with tactile holograms—3D displays with which you could conceivably interact.