The Ear is a very complex organ and comprised of three major parts- the outer ear, the middle ear, and the inner ear. The body transforms sound in many different ways, before it even reaches our brains for interpretation.

The Outer Ear
The outer ear starts at the pinna, the part of the ear you see. From there is the external auditory canal, or ear canal, where wax is produced and hair grows to protect your ear.  These structures help collect, emphasize and funnel acoustic sound waves to the tympanic membrane, or ear drum, the last stop on the outer ear highway.

The Middle Ear
The middle ear is an air-filled cavity with three suspended bones called ossicles. When sound hits the Tympanic Membrane sounds are transformed from acoustic waves into mechanical waves that vibrate the ossicles. The first ossicle is the Malleus which is connected to the tympanic membrane. The other end of the Malleus in the Incus which is connected to the Stapes. The Stapes vibrates in and out of the oval window of the inner ear, the cochlea.

The Inner Ear
The Cochlea is a fluid filled membrane encased in the temporal bone of the skull.  When the stapes moves in and out of the Oval Window it creates a hydraulic waves within the fluid of the Cochlea. This wave causes one of membranes floating within the fluid to move, which stimulates the tiny hair cells sitting along the length of the membrane. When these cells are stimulated they create an electrical impulse that sends the information to the auditory nerve.

The Central Auditory System is responsible for carrying the sound information to the brain and interpreting the message. 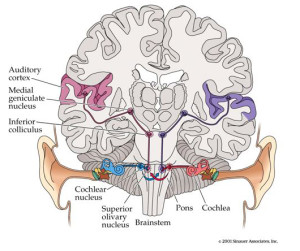 Impulses from the cells in the cochlea are picked up by the auditory branch of Cranial Nerve VIII, the Vestibulocochlear nerve. Cranial Nerve VIII carries most of the impulses to the brainstem, where they hit a few checkpoints for processing on the way to the brain. For most impulses, the first stop from the nerve is the Cochlear Nuclei then they travel to the Superior Olivary Complex within the Medulla. The signals are then transferred to the Inferior Colliculus in the Midbrane. The Medial Geniculate Body within the Thalamus relays the signal from the Midbrane to the Auditory Cortex. It is the Auditory Cortex that translates the electrical impulses into meaningful sound.